Mayfair has been home to many legends over the years. In fact, two of the biggest ever musical stars of the 18th and 20th centuries once made their homes on Brook Street: George Handel and Jimi Hendrix. Formally the Handel House Museum, this little gem in the heart of Mayfair has been updated to include the flat of 1960s guitar hero Jimi Hendrix – so you get two musical superstars for the price of one.

The unassuming museum is easy to miss as you stroll along Brook Street – look out for the two blue plaques and a red door. The entrance is currently tucked away on Lancashire Court due to roadworks.

Handel’s House is furnished with 18th century paintings and instruments, including a spinnet, a bureau organ and a double barrelled harpsichord. The rooms in this part of the museum are a little sparse, leaving the details of Handel’s life in Mayfair to the imagination. However, the beautiful instruments and furnishings somewhat make up for this. 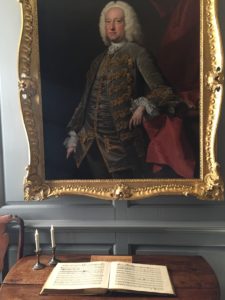 What the Handel house lacks in terms of curation and information, the Hendrix flat has in abundance. As you reach the top floor, you are transported back to the late 1960s, to bustling Mayfair and the height of hippie culture. Hendrix made London his home for 4 years before his death in September 1970. If you’re a fan of 1960s music and guitars, then you’re in the right place.

The exhibition tells the story of Hendrix’s arrival in Brook Street in 1968 when his career began to take off and eventually make him the most famous guitarist of all time. The flat was the site of numerous photoshoots and musical gatherings, the evidence of which has been used to restore the flat to its former glory.

Verdict: Definitely worth a visit for tourists and locals alike. As well as its permanent displays, the museum has an impressive musical events programme including classical concerts and Friday Lates, which start again in 2018.