Just as last month’s terrific snowstorm arrived in Mayfair, I visited Boisdale to sample the Wild and Foraged Tasting menu.

The wintry weather meant Mayfair was less busy than usual, everywhere was quiet (including the restaurant) but, that didn’t dampen our spirits or enjoyment of the evening.

The menu was charmingly divided into chapters – like a good book. Each course was paired with a different glass of wine which, given that there were seven courses to enjoy, was rather a lot to drink!

We began with champagne and oysters, which were delicious. Whitstable Bay oysters are by far the best I have ever tasted and a lovely treat to start the meal. The ‘introduction’ was followed by Chapter One, a winter salad. This was a rather strange choice for a first course, soft and floral but perhaps a little too modern. Chapter Two was venison with black truffle, which is always a nice touch with a dish, adding a depth of flavour. By Chapter Three, honey roast cod with champagne cream, I was getting rather full! But the fish was beautifully cooked and paired with a Cote du Rhones wine. The next course was a poached pheasant breast; this was soft and fiery, and served with the most scrumptious parsnip puree (I could have eaten a whole plate of that by itself!). I was relieved to learn that Chapter Five was a pudding course; a caramelised custard, similar to a creme brûlée. The meal finished with a selection of British cheeses, a delicious homemade chutney and a glass of port.

The menu is a brilliant introduction to game and Boisdale, showing off their true colours with freshly sourced ingredients and lovely wine pairings. Boisdale is known for its live music, and the evening’s entertainment began around Chapter Four, which created a lovely buzz in the restaurant. The staff were wonderfully helpful and welcoming. The menu and venue comes thoroughly recommended! 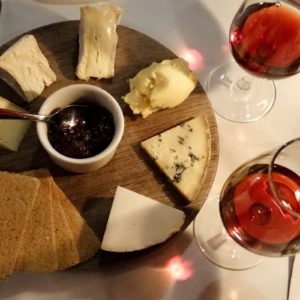